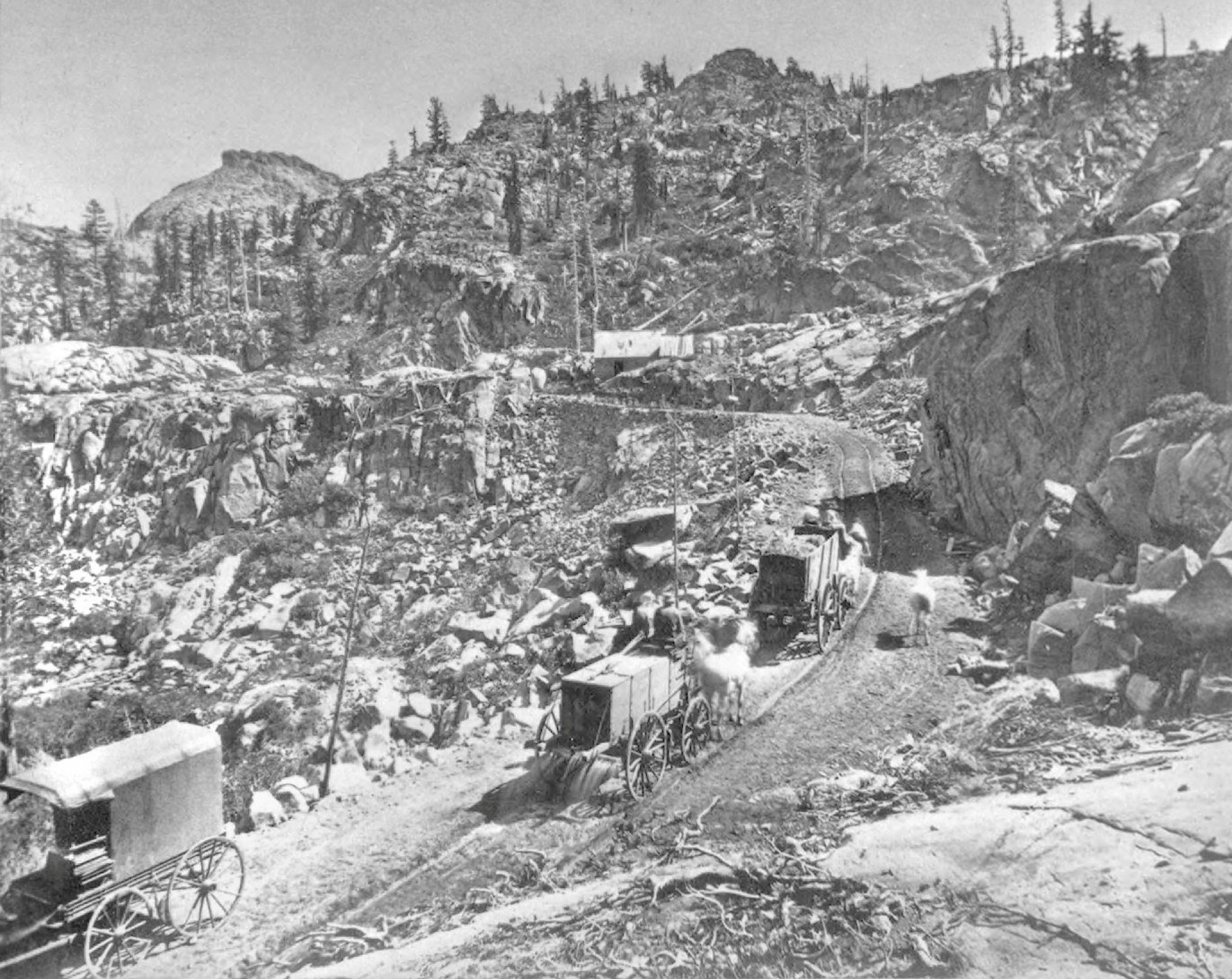 Above, 1864 after the DFDLWR was completed and before the tunnel drilling began. The future railroad tracks and snowshed will be up close to the small shed. The photographer's wagon is parked at the left. Notice the rock under the rear wheel. The wagon in the center is spilling melted ice since this is the steepest part of the road. I combined two photos to create this image. This road still exists but trees have grown on it.

Back then, if you were to continue walking up that road and then climb to the left and turn back around, you'd see the views in the photos below... 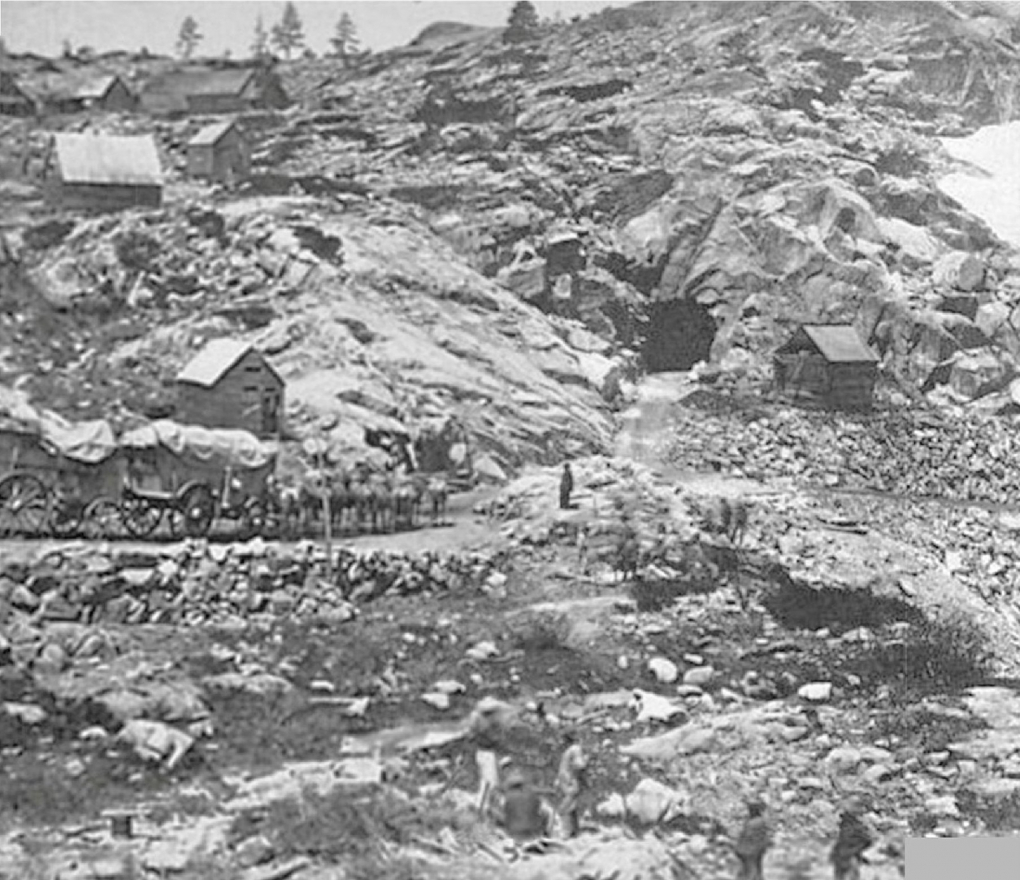 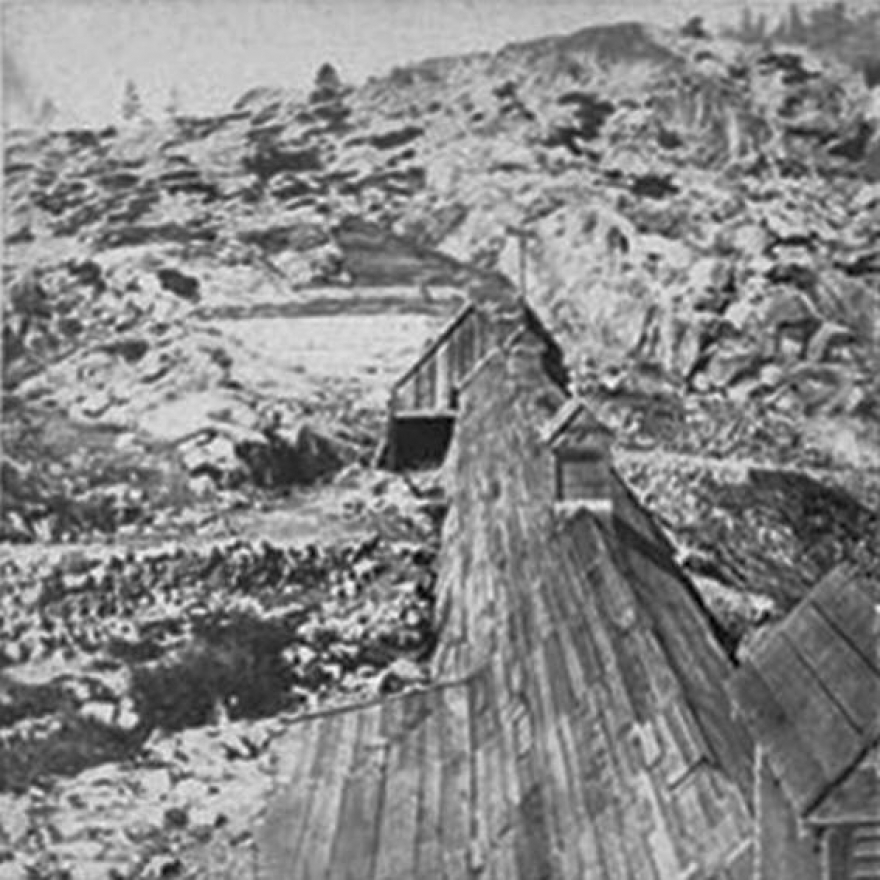 Above left, 1865, this is after some progress has been made drilling into the Summit Tunnel. The road goes downward to the right and upward to the left. The future snowshed (seen at right) covers the road and for 46 years, everyone will need to make a turn inside the snowshed after first checking to see if a train is coming.

The outcropping where the man is standing was mostly removed for the tracks, but for some reason, the workers left a chunk of it that all vehicles had to go around and is still there today. It's visible in the right photo. Someone must have said..."we've blasted our last rock, no more."

Below, C.L. Pond's 1870 photo of backside of snowshed at Donner Summit

Below is a detail from a 1872 Bierstadt painting showing the opening on the downhill side (which is the slope seen in the first photo above) and the road curving around on the uphill side after going throught the snowshed. 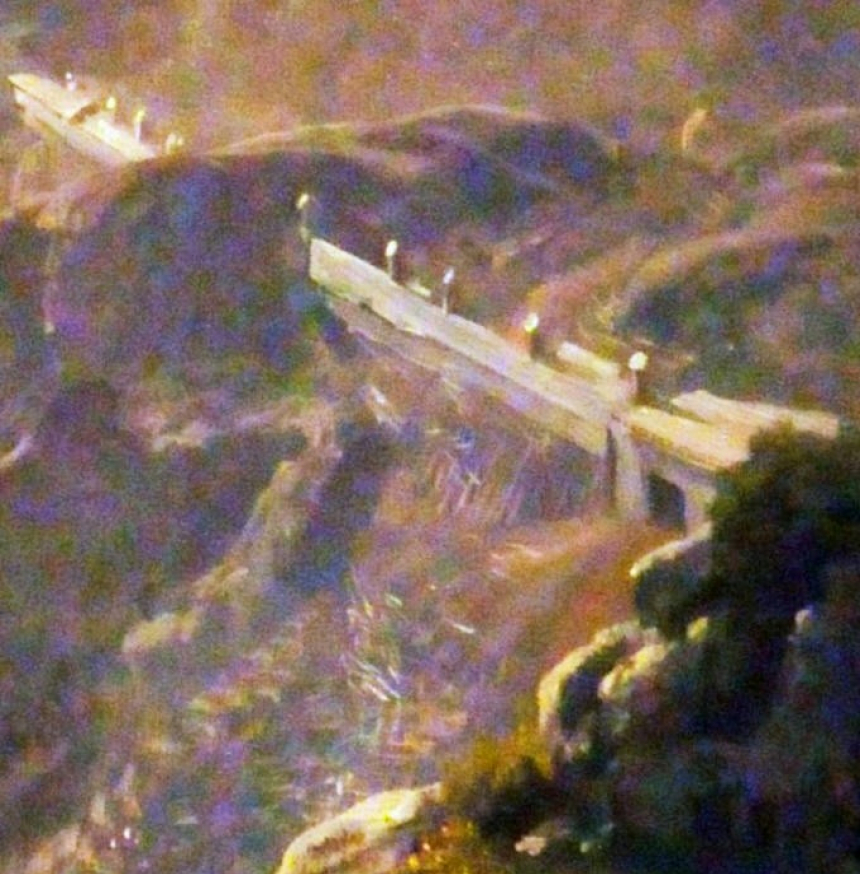 Below, 1864, looking down from the area of the snowshed above. Notice the long wagon train. The road is hard to see today, but it's there among the brush and erosion. Water runoff used the road as a channel for decades and washed away the gravel and any base. At some time, and it could have been when the road was built, a concrete "causeway" was placed in the section around the first curve at the right as it goes into a marsh area (and trees). This lifted the road up 2 feet. It's still there. 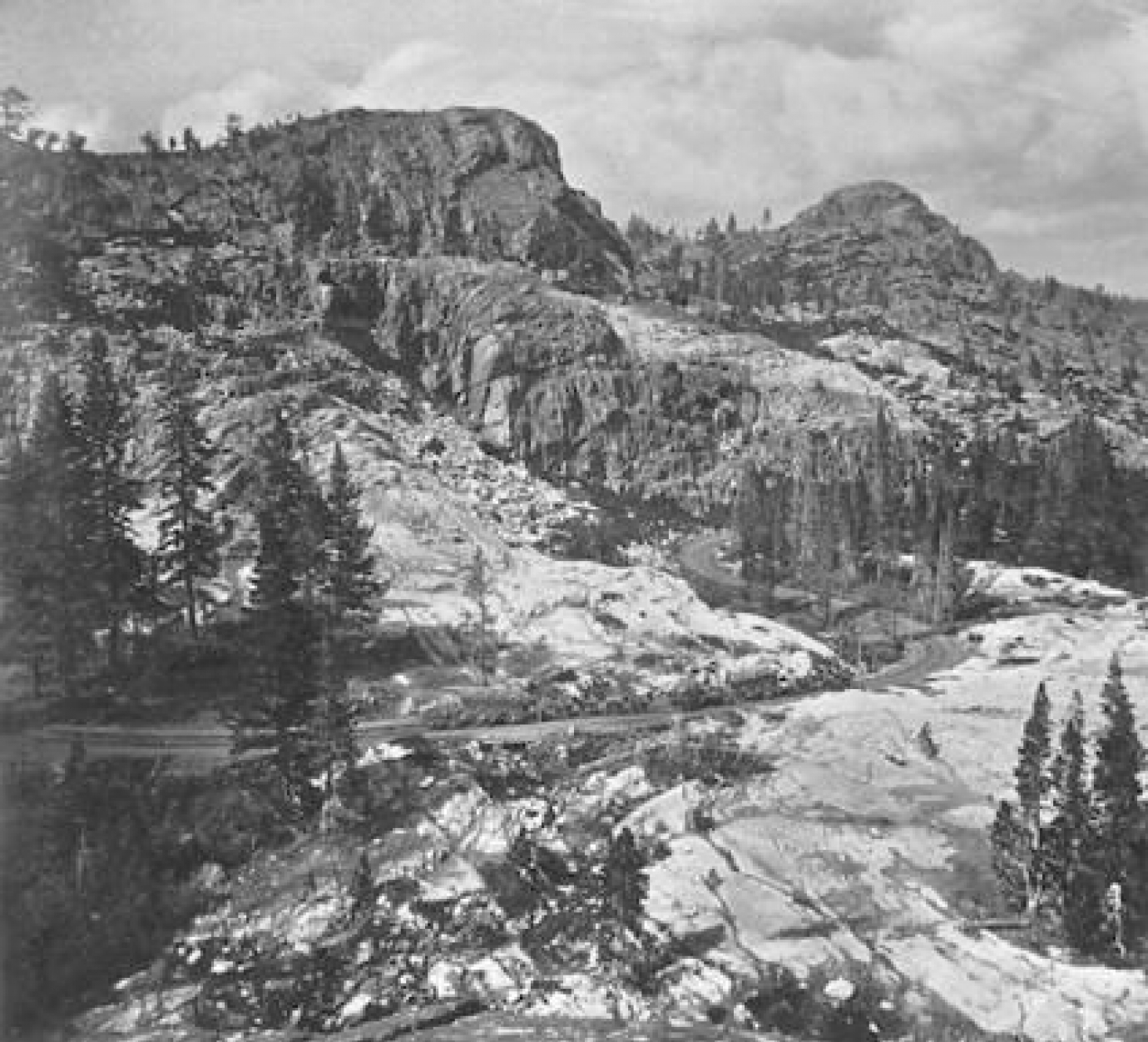 Down at lake level... 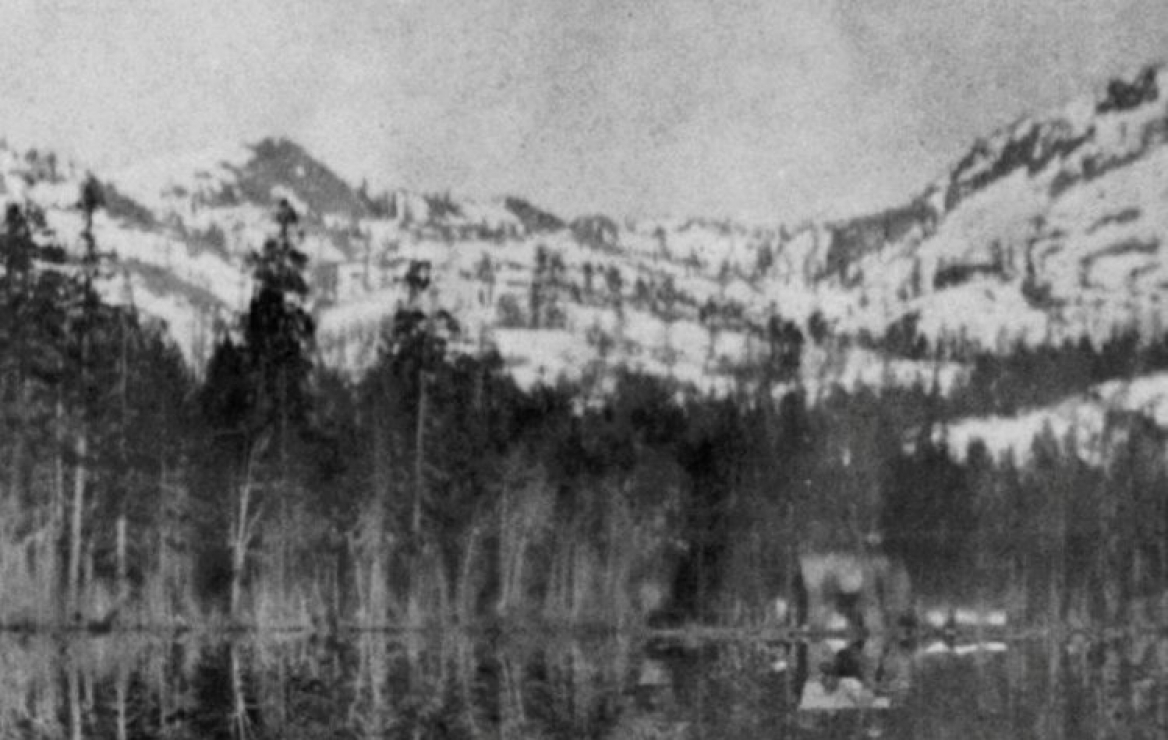 Pollard's Hotel on the west shore of Donner Lake, also known as Pollard's Station and The Lake House (burned down around 1888).

Notice in the above left photo, there is no railroad on the mountainside yet, so the photo was taken before 1866. In the above two photos, there are two structures in each photo...the one on the right is a stable/barn. Both structures are represented by black dots or squares in several maps from the time, including the first known map of this area dated 1865 (top right).  All three maps also show the road located between the two structures.

The barn building would be just outside the left frame in the photo below and the horses and wagons appear to be on the road.

This enhanced and colorized version of an 1868 Lawrence & Houseworth photo, copyright Rick Martel. 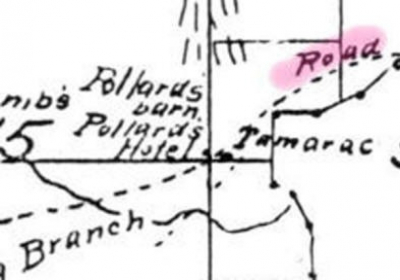 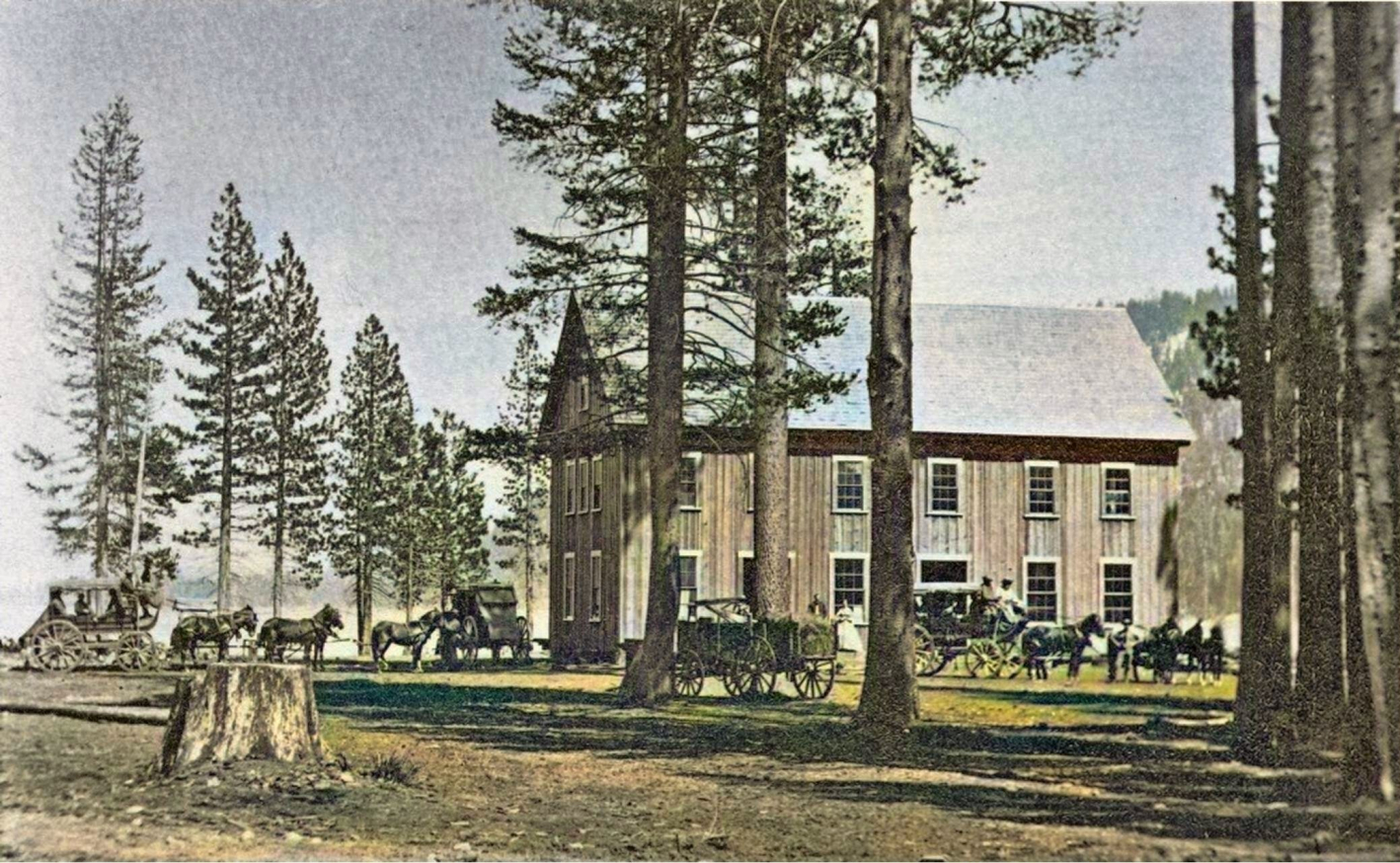 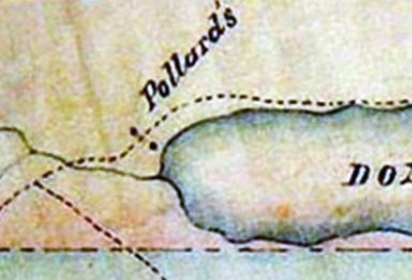 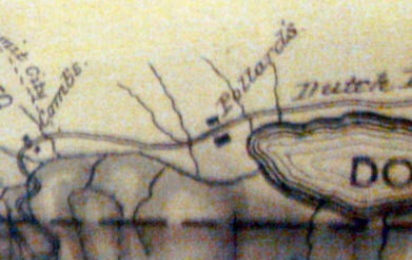 Joseph D. Pollard advertised in San Francisco newspapers and told guests they would be picked up at the Summit Tunnel in a wagon. Apparently, Pollard had arranged with the railroad to let his guests off at the opening in the snow-shed where the wagon road went through a few feet east of the tunnel, best seen in the Bierstadt painting above.

The wagons would then travel five miles down the mountainside on the new Dutch Flat Donner Lake Wagon Road to his hotel.

The ad at the right is from June 26, 1868. This was after a rebuild after a fire destroyed the original.

These ads are interesting in several ways...but mainly as evidence that in just 22 years after the first Europeans began settling a nearly empty* and wild California, a few industrious, creative, tough, and hard-working men produced the wagon road and hundreds of other local roads, the transcontinental railroad and several smaller railroads, ports, cities of San Francisco and Sacramento and hundreds of smaller towns and counties and gave them names and boundaries, built schools, and established local governments, water supply systems, newspapers, and general commerce. And at Donner Lake, Pollard and Grant produced these hotels in which tourists were able to comfortably visit the site of the Donner Party and find "The table will always be supplied in the most liberal manner" and "other means of pleasure are kept in constant readiness." These for-profit makers and producers knew they wanted a better life and they made it happen...fast.

*approximately 15,000 people lived in present-day California in June 1846, about half were Indians. 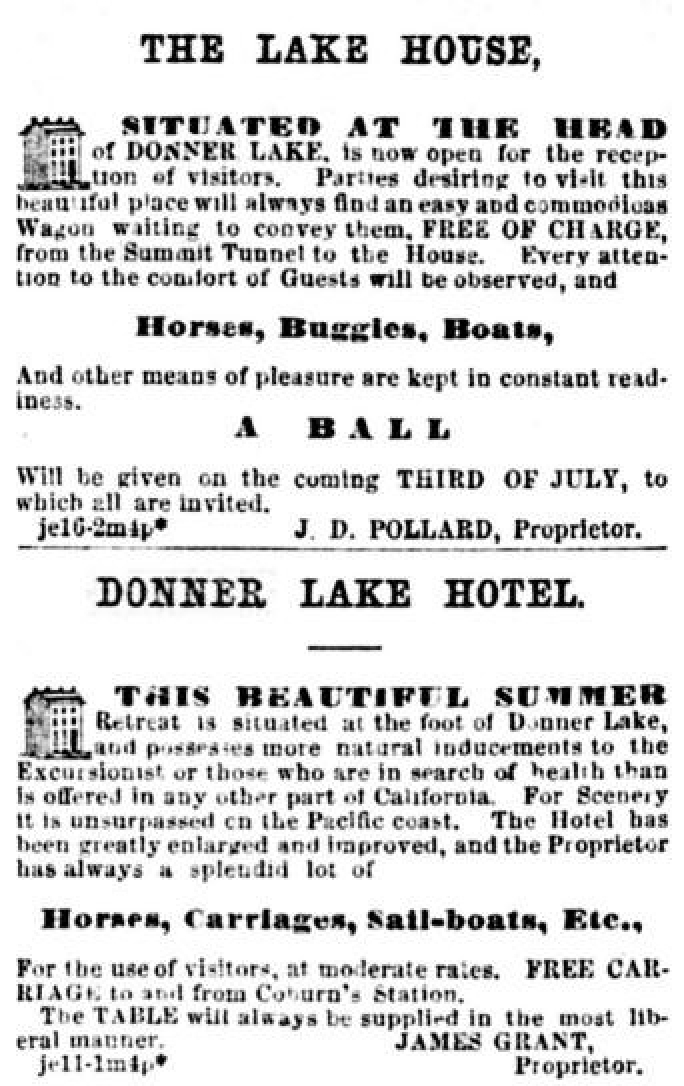 Below, 1866 photo at the east end of Donner Lake

A Lawrence and Houseworth photo titled

(As with other photos here, this repaired, enhanced and colorized version copyright Rick Martel) 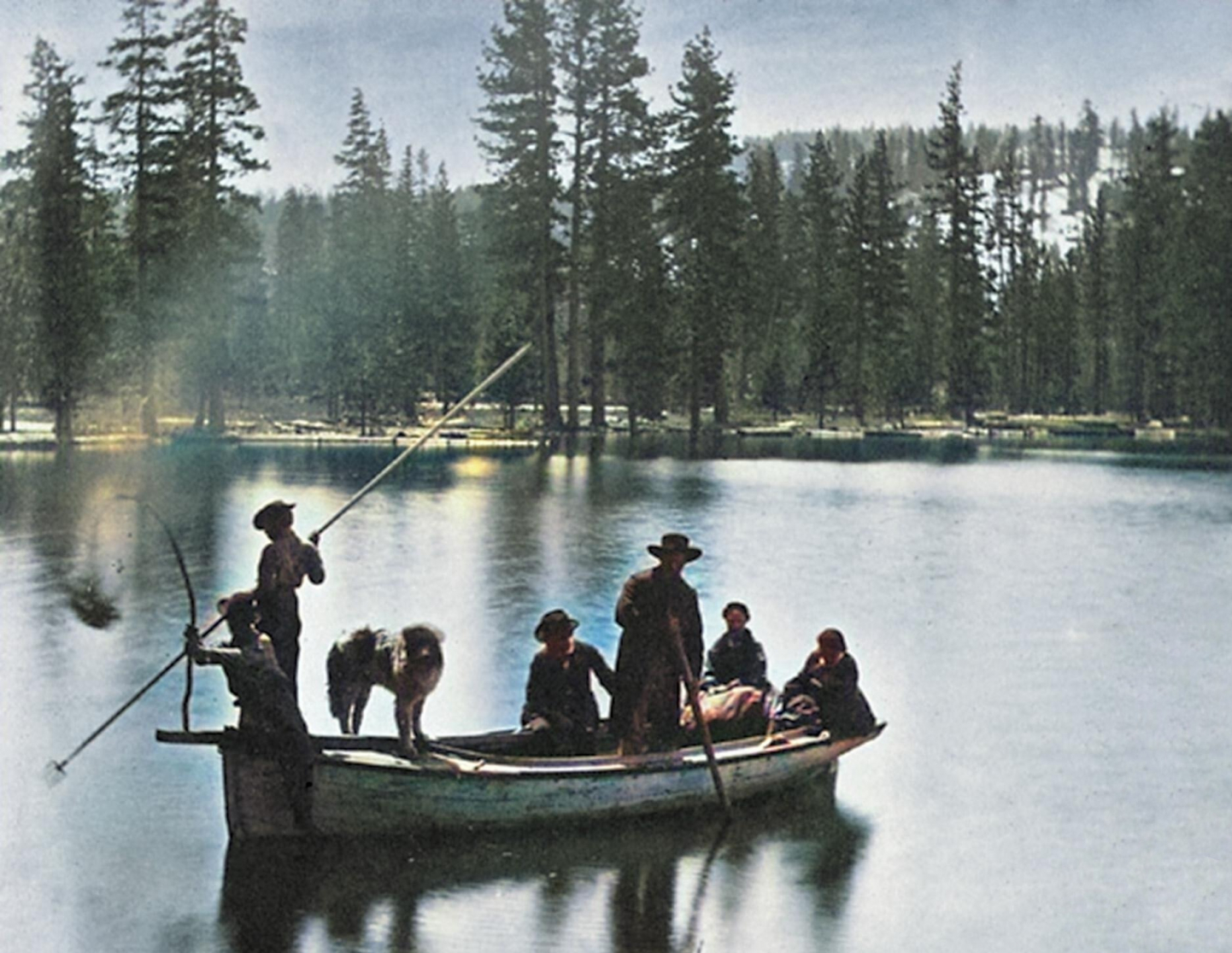 Below, 1866, photographers at the west shore of Donner Lake, colorized from original Lawrence and Houseworth photo 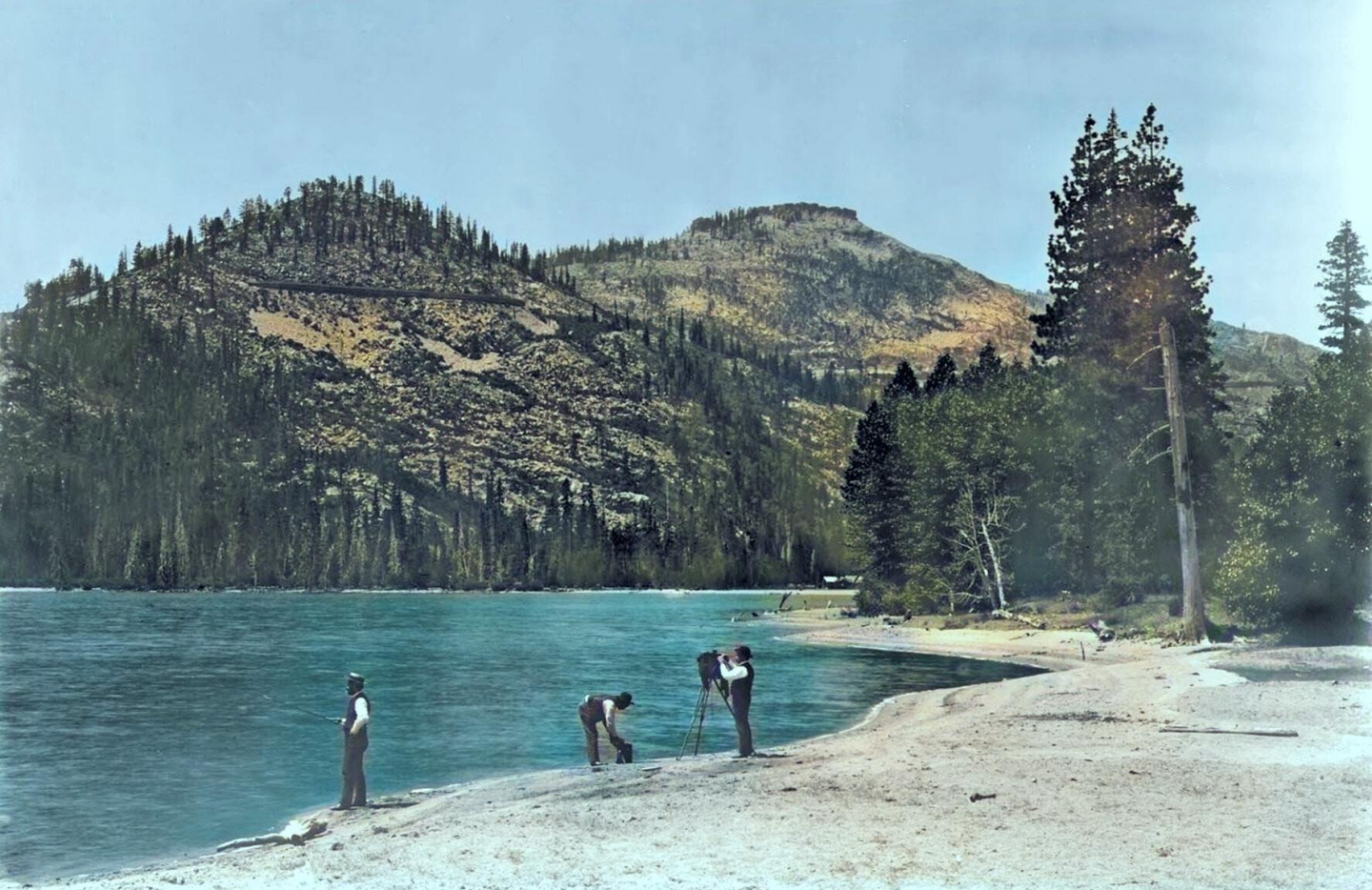 They may be wrapping up a photoshoot of the people below, at the same west-end beach...also an 1866 Lawrence and Houseworth photo, colorized. 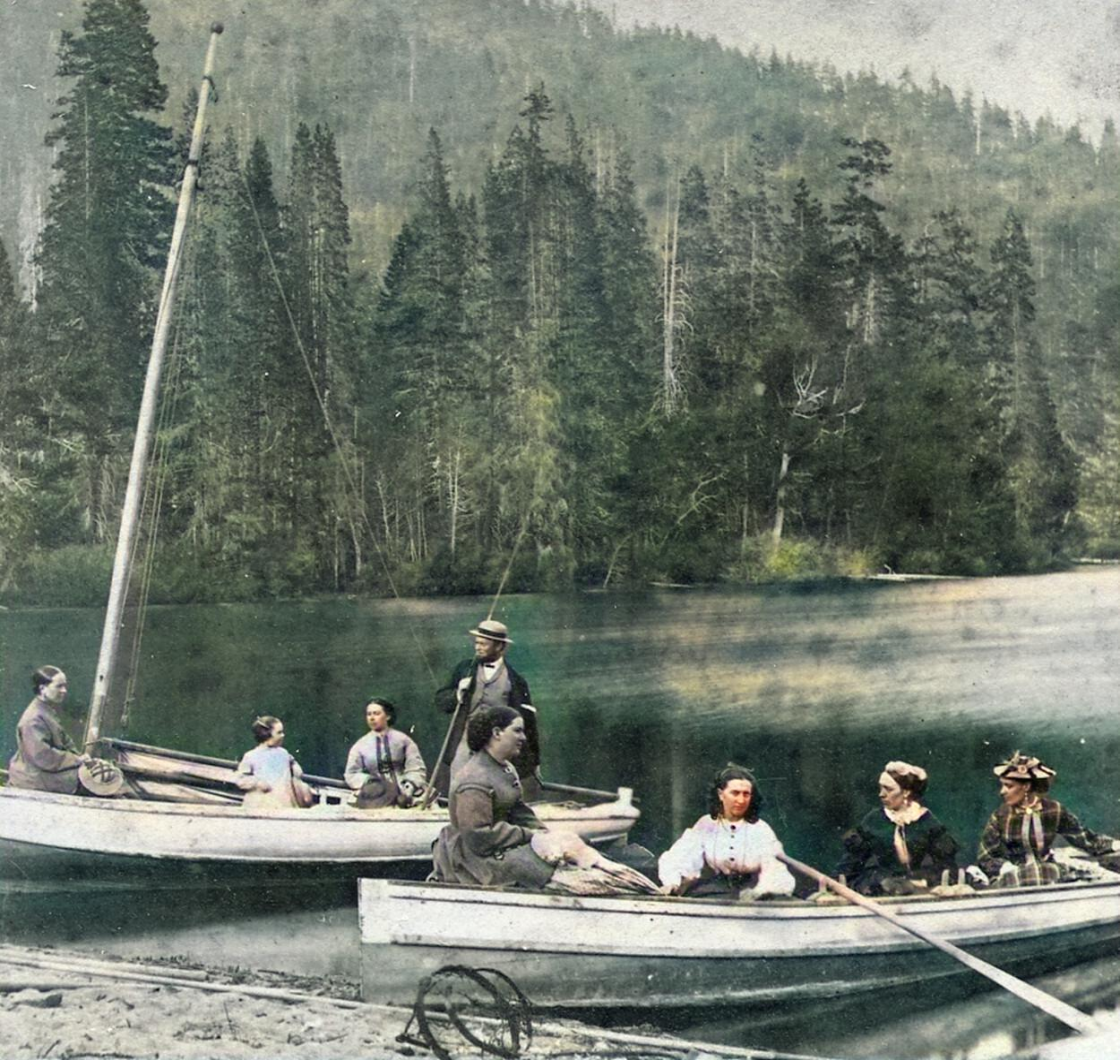 Below left, a famous painting by William Gaul, titled "On The Way To The Summit (The Donner Party)"...it's the same spot as the 1864 Dutch Flat Donner Lake Wagon Road in the top photo of this page. It was painted in 1891, 27 years after the DFDL Wagon Road was built and yet it was supposed to represent the Donner Party in 1846. It is very unlikely that there was a natural granite "shelf" at this spot on just the perfect incline prior to the Wagon Road, and even more unlikely that any natural shelf would be a nice smooth 16-foot wide roadway shown in the painting that just happens to be the width of the DFDLWR. Gaul obviously had enough knowledge of history to know that the railroad and snowsheds were not yet built in 1846, so he deleted the snowsheds in his painting. If Gaul had any first-hand knowledge of a natural granite shelf used by early pioneers, he would also have known, or learned by just looking at the road, that it had been altered with a great deal of engineering and rock and boulder fill under this section of road, along with blasted granite above the road and he would have modified his painting to reflect a less engineered road. But he didn't. Nice job painting, but as a representation of the Donner Party, it's a Fake Painting.

The other likely path for the Donner Party or any traveler in those first years around 1845 (other easier routes were soon discovered) would be in the steep bare granite slope that begins at the petroglyphs and climbs next to the brush-filled dip to where the "China Wall" was built in the 1860s. It is even steeper than the 1864 section above and would have been an even more miserable climb in snow than shown in the Gaul painting. Evidence that this was the pre-1864 road route is all the tourists and hikers every day in the summer who seem to just figure that is the most direct way to get to somewhat the same point...the 1914 tunnel under the railroad. But they soon realize it's more of a climb than they expected. This 20th Century painting by George Mathis below right is at that location. For people and animals using the Donner Lake route before 1864, this climb was probably the most difficult part of the entire journey, with the animals with steel shoes slipping on the steep granite.

By the way, if you're wondering if we can't just look at the old plans for the DFDL Wagon Road to learn about the engineering and anticipated before and after views...they are nowhere to be found. Maybe they'll show up someday. 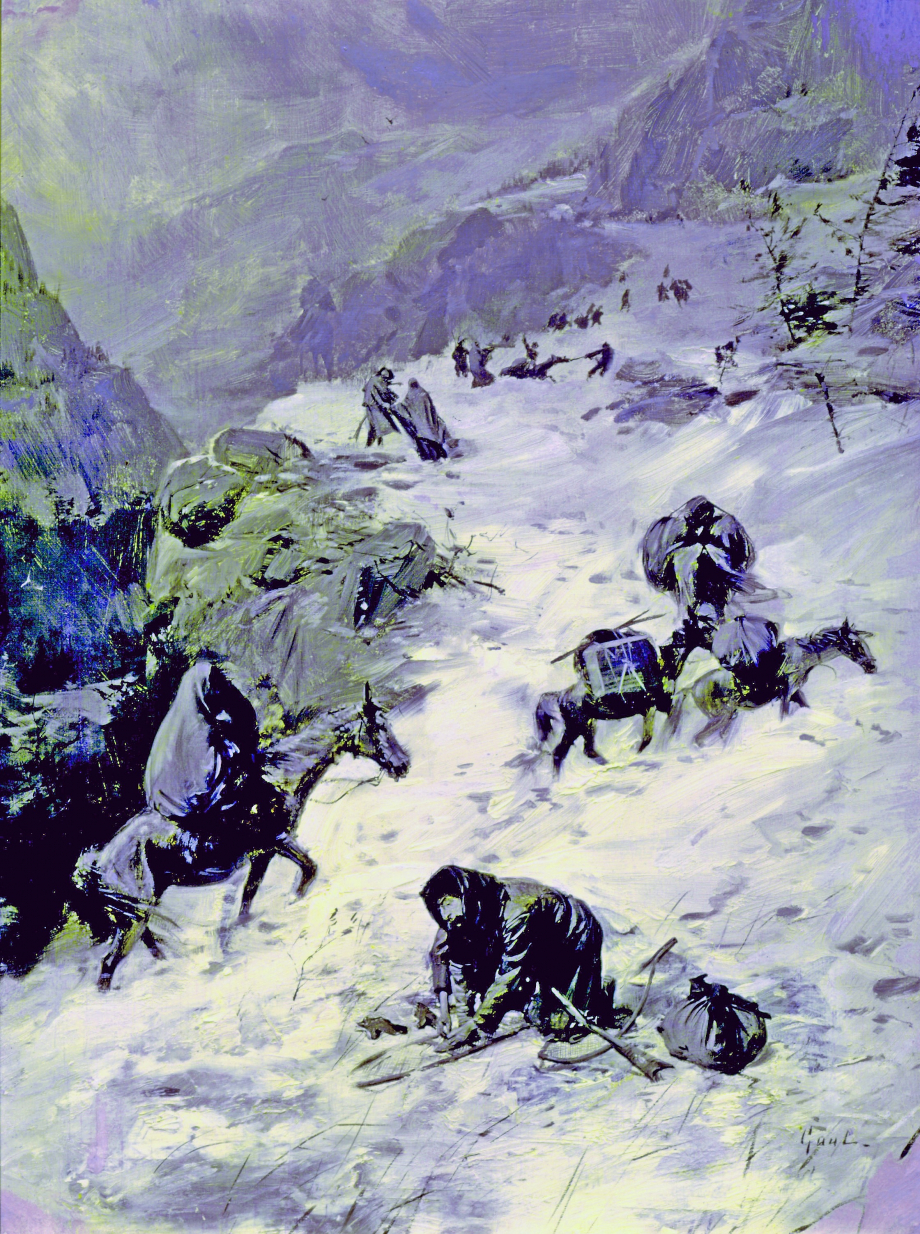 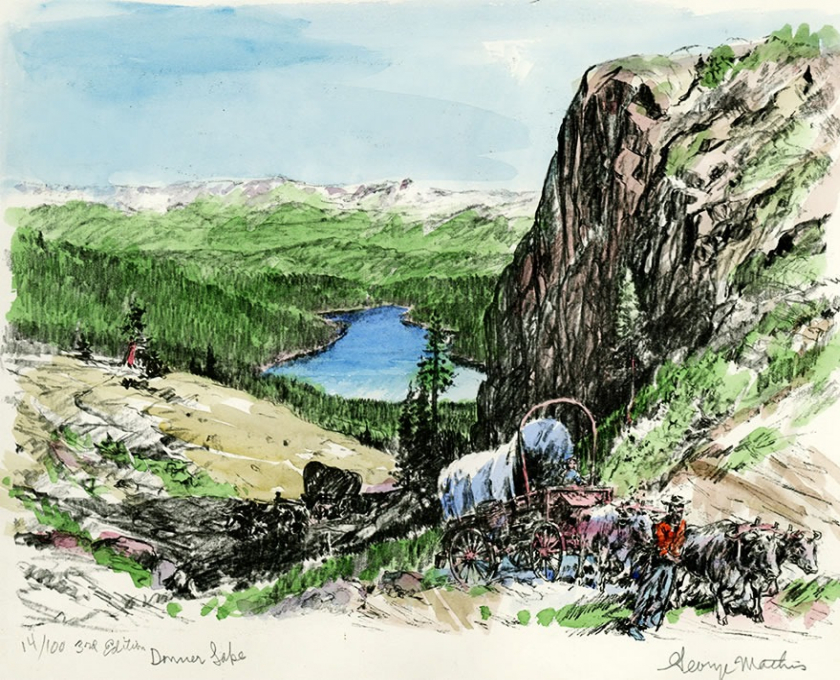 The story has been repeated often that the pioneers at Donner Pass had to take apart their wagons and use pulleys to raise them over granite walls. Well, it wasn't Donner Pass, it was Carson Pass. Below is a painting titled "Rough Going Over The Sierras" that is often attached to the Donner story without any further detail. Here are the missing details: It was painted in 1948 by Harold Von Schmidt for the Morrell Meat Company's 1949 calendar. The description on the calendar states:

"Toward the end of the long westward trek, the wagon train came to Carson Pass. Old-timers said the first two miles of its steep and rugged ascent was the most dreaded of the entire route. In some places, the trail was completely barred by walls of rock. Many emigrants had to unload and dismount their wagons, hoist them up the cliff with block and tackle, and reassemble them on top." 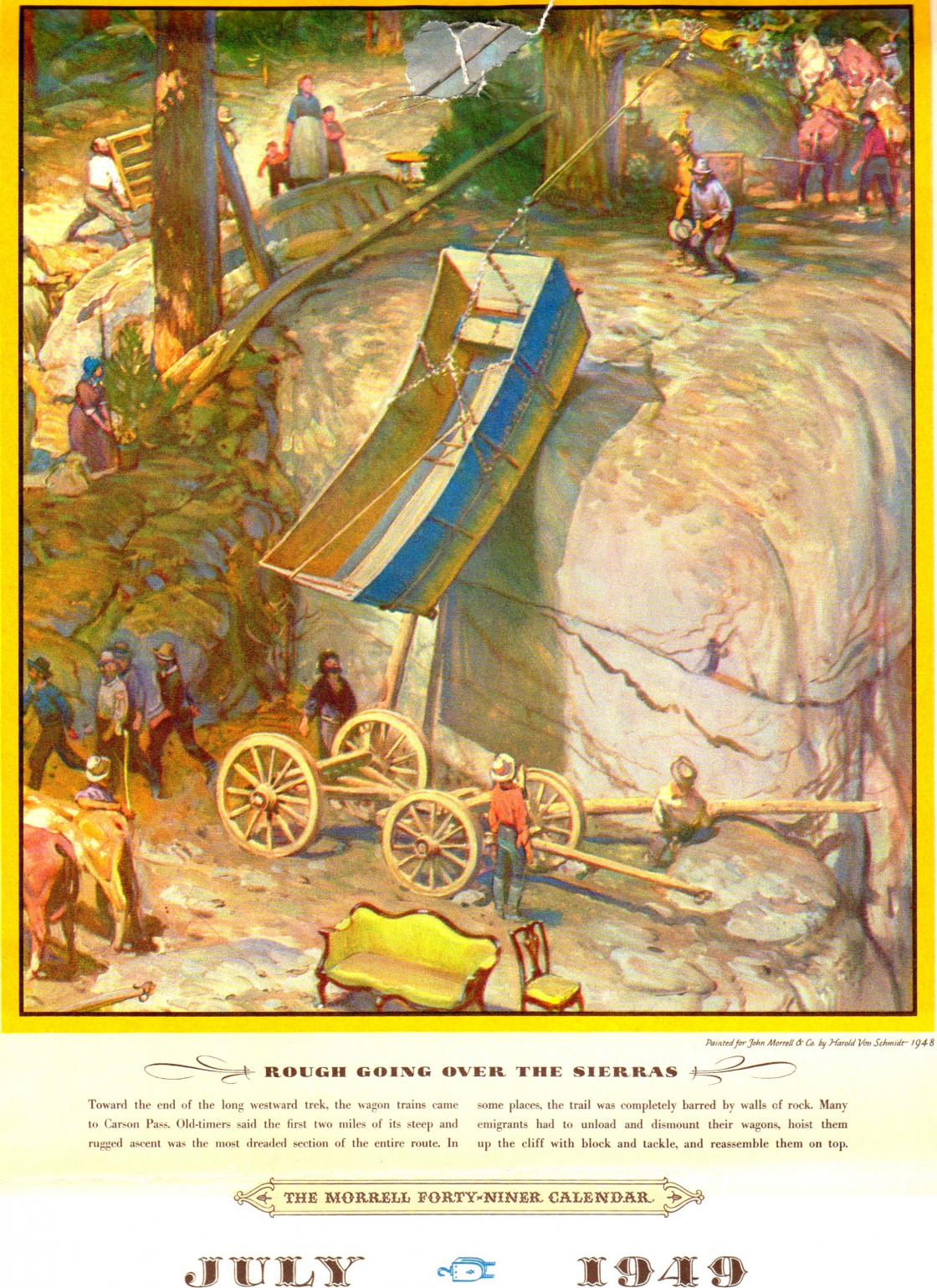 Many more photos yet to come...check back.

Please support this website by supporting the banner sponsor above.